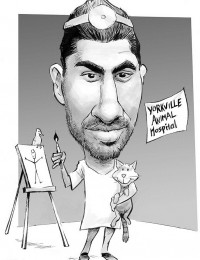 Humza began working for Yorkville Animal Hospital in September 2013, and we couldn’t be more pleased. As our one and only Registered Veterinary Technician, Humza is responsible for the daily care of your precious little darlings. He does a darned good job of it too.

Born and raised in Mississauga, Humza entered the Veterinary Technician program at Sheridan and graduated in 2011. During those two years, Humza adopted two kitties, named Misty and Angus. They are the loves of his life, despite the fact that Angus reportedly hates him and much prefers his sister. There’s no accounting for good taste in the feline world.  He also owns a beta fish, who just floats around and doesn’t do a whole lot.

During school and after graduation, Humza worked at a 24 hour hospital in Brampton, until he realized that cleaning doggy spew at four in the morning wasn’t his dream job. He moved to a clinic north of Toronto for a while until coming to work downtown with all the lovely people of Yorkville Animal Hospital.

Aside from animals, Humza’s other great love is art. He especially loves realism and loves to draw portraits. A sample of Humza’s work is displayed in all its glory at www.humzer.deviantart.com. He enjoys nature, hot weather, culture and the occasional night out dancing. Recently, Humza has begun exploring more of Toronto’s gastronomic offerings. He is greatly enjoying his ethnic epicurean explorations, and his mouth hasn’t been bored in months.