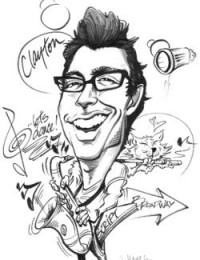 Clayton started working for Yorkville Animal Hospital in September 2011 as an animal care assistant, and has since expanded his horizons to help us out on the front desk from time to time.  Clayton was born and raised way up in North Bay, where he still goes occasionally to visit his family.  He left for life in the big city to attend the Randolph Academy for the Performing Arts, where he graduated in 2002.

Clayton is destined to grow up to become a crazy cat lady.  He has always had a special fondness for felines, and is currently the proud daddy of a boisterous and very handsome orange tabby named Haku, and a rambunctious but affectionate kitten named Sookie Nights.  He is also the official godfather of Dr. Gignac’s kitty, Biner (who, if you remember from Dr. Gignac’s bio, is the cutest kitty in the whole world).

Oh, and he can also see ghosts, which is kinda cool and creepy at the same time.  So far nothing at Yorkville Animal Hospital, we are very relieved to report.