Ovariohysterectomy or spaying your dog or cat, is a routine surgical procedure where the ovaries and uterus are completely removed. It is usually done around five to six months of age, although it can safely be done at any time.

The surgery itself generally lasts from 15 to 30 minutes, depending on the size of the patient. The patient is given a premedication containing sedatives and analgesics (pain-killers) before the procedure and is placed on intravenous fluids. A drug or combination of drugs is given intravenously to induce anaesthesia (cause the animal to become unconscious), and the patient is then intubated to ensure a safe, open airway, through which anaesthetic gas and oxygen are administered.

Blood pressure, temperature, heart rate, respiratory rate, oxygen blood saturation, mucous membrane colour and reflexes are all monitored routinely throughout the procedure to ensure that your pet is stable and comfortable.

When the anaesthetic is turned off and your pet is beginning to wake up, she is given another injectable pain killer, which should help to keep her comfortable until the next morning. Oral pain killers are always sent home for several days after surgery.

Contrary to popular opinion, spaying your female dog or cat will not change her behaviour or result in obesity. The only thing that can cause an animal to become overweight is to feed too many calories for the amount of exercise that he or she is getting.

When the ovaries are removed during a routine spay, there are no hormonal differences after the procedure than there were before the procedure (if she has not yet reached sexual maturity), and so there is no way that their behaviour would change. Many pets slowly calm down as they get older, and this can sometimes incorrectly be attributed to the fact that they have been spayed.

There are a number of very important health concerns that are practically eliminated after a female is spayed.

Mammary cancer is a devastating disease, as it is in people. We know for a fact that the risk of mammary cancer increases dramatically each and every time a pet goes through a heat cycle. By the time they have been through several cycles, there is no longer any reduction in risk of developing breast cancer. Therefore, early spaying is key to preventing this terrible disease.

Intact (unspayed) females will have periodic heat cycles, where they will bleed onto your new furniture, and they may begin to act strangely. Females in heat will often try to roam (get away from home) in search of males, and any intact males within miles will smell her special scent and come a-runnin’. 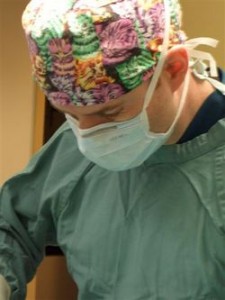 Often, even if not bred, females will go through a pseudopregnancy, where they look and act exactly as if they were pregnant, to the point of building a nest when “whelping time” arrives, and even producing milk from their mammary glands. This can be quite disconcerting to the owner who’s dog has never even seen a male dog. Eventually everything passes and no puppies are produced. As of yet, no documented cases of Divine Conception have occurred in doggies or kitties.

As the uterus ages, changes can begin to occur which predispose it to becoming infected after a heat period. Pyometra is a uterine infection, and can be an extremely dangerous, life-threatening condition requiring emergency surgery.

Several problems can occur during whelping as well (giving birth). Sometimes, drug intervention or surgical intervention (Caesarian sections) are needed to retrieve the puppies or kittens, especially in certain breeds of dogs.

Most importantly of all, dogs and cats are being killed in animal shelters every single day because they do not have homes. For every puppy or kitten that your little darling produces, that is one more animal that is put down in a shelter that could have gotten a new home. The number of pets out there far exceeds the number of homes for them. Please do not contribute to this terrible problem.